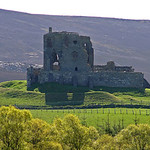 Cochrane’s castle?
Auchindoun Castle is believed to have been built by Thomas Cochrane (sometimes erroneously called Robert). This shadowy, late 15th-century figure was a favourite of King James III. It is said that Cochrane built the great hall at Stirling Castle for James and was made Earl of Mar in return, but neither claim is independently supported. All we do know is that Cochrane was hanged from Lauder Bridge in 1482 during a plot by James’s nobles to undo the king.

‘The mains of Auchindoun’
The earliest reference to Auchindoun is in 1509, when Sir Alexander Ogilvy of Deskford granted ‘the mains of Auchindoun, with its castle, fortalice and castle hill’ to his nephew, Alexander. In 1567 the Ogilvys sold the castle to Sir Adam Gordon, a kinsman of the 4th Earl of Huntly. Gordon’s claim to fame was murdering all the occupants of Corgarff Castle, over the hills in Strathdon, during a bitter feud in 1571. Apparently, Auchindoun itself was attacked and burnt by William Mackintosh in revenge – as a result he was beheaded by the Countess of Huntly’s cook. The castle later returned to the Ogilvys, but by 1725 it was derelict.

A lonely stronghold
Auchindoun stands gaunt and imperious on the crest of a high bank overlooking the River Fiddich, and beside the old hill road to Strathdon. The stone castle is surrounded by impressive earthworks, but whether these are Iron Age or Dark Age, or even the remains of an earlier medieval castle, is not known.

The castle itself comprises an L-planned, four-storey tower house set within a rectangular enclosure wall. The tower may look desolate in its present state, but in its day it was evidently a structure of some sophistication. The lord’s hall and withdrawing chamber on the first floor were covered with fine stone vaults – over the hall was a ribbed four-part vault in two bays, while over the chamber was an unusual unribbed groin vault. The tower’s design and architectural details point to a construction date in the late 1400s; the sophisticated vaults perhaps support the notion that Auchindoun was Cochrane’s castle.

Access on foot only, route path is steep and can be wet at times.  Path is well signposted and accessed from the Dufftown to Rhynie Main Road. View exterior only.