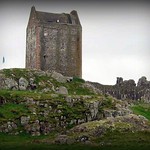 Six miles northwest of Kelso on the B6397 is the village of Smailholm, where a turning leads to Smailholm Tower, a classic Scottish tower house and an evocative place full of history and romance. The 15th-century fortified farmhouse, built by the Pringles, squires to the Earls of Douglas, stands on a rocky pinnacle above a small lake. Sir Walter Scott's grandfather owned the nearby farm and the young Scott came here as a sickly child in the 1770s to improve his health. So began the writer's long love affair with the lore and landscapes of the Scottish Borders which inspired so much of his poetry and prose. Scott would write a ballad about this gaunt tower house - The Eve of St John - as part of a deal with the owner to save it. Today Smailholm houses a small, unremarkable museum relating to some of Scott's works, but the views from the top of the tower are rewarding.

The setting contributes hugely to the appeal of this nice little tower house which stands on a small rocky ridge in an upland area of high moorland. It still looks much as it did when Turner painted it in the early 1800s. The large pond in front of it is a mill pond ; its water used to power the nearby mill down by the farm

The tower is a pretty building , but not packed with interest; the best part is that you can get out onto the roof. Smailholm famous for its association with Sir Walter Scott, who as a child was sent to stay with his aunt at th nearby farm. The stories he heard inspired his interest in local ballads and legends.

Route: signposted off the B6404 to the west of Kelso
Entry Feyes