Tweet
One of the finest surviving Brochs in Scotland and set in beautiful surroundings and pretty much undisturbed. 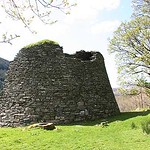 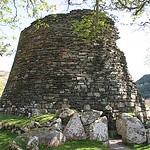 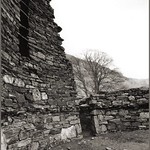 The second best preserved broch in Scotland after Mousa in Shetland. It stands on a valley floor (Glen Beag, Highlands); along the road, 500 m to the east is another well preserved broch, Dun Troddan.

In the highest part of the wall, 10.1m in height, two scarcement ledges are visible: the upper one is a unique survival in Scottish brochs and probably supported a conical roof.

The wall tapers inwards, in the distinctive 'cooling-tower' profile like Mousa broch in Shetland. To the left of the entrance a doorway leads into a corbelled cell (on the left) and a stone stairway (on the right).

Four galleries and part of a fifth survive in the thickness of the wall. The voids visible in the inner face of the wall could have been used to ventilate and light the upper galleries.

Outside the broch are traces of later buildings.

The site was excavated in 1914 and some stone lamps, rotary quern stones and spindle whorls were found.

Now in care of Historic Scotland