Maeshowe is a Neolithic chambered cairn and passage grave situated on Mainland. It was probably built in around 2800 BC. It gives its name to the Maeshowe type of chambered cairn, which is only found in Orkney. 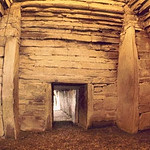 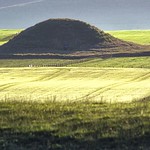 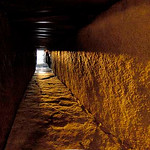 Less than a mile northeast of the Stones of Stenness is Maes Howe, the finest Neolithic burial chamber in Europe. It was built around 2750 BC, making it contemporary with the Standing Stones and Skara Brae, and is amazingly well preserved. A huge mound covers a stone-built entrance passage which leads into a central chamber - over 12 ft square and the same in height - with three smaller cells built into the walls of the tomb. A fascinating feature of the site is that the winter solstice sun sets directly over the Barnhouse Stone, half a mile away, and shines down the entrance passage of Maes Howe and on to the back wall of one of the cells.

When it was opened in 1861, no human remains or artefacts were found, giving no clues as to its usage. However, in the 12th century Vikings returning from the Crusades broke into the tomb searching for treasure. They found nothing but left behind one of the largest collections of runic graffiti anywhere in the world, as well as carvings of a dragon, serpent and walrus. Many of the inscriptions are pretty basic, along the lines of "Thorfinn wrote these runes, but some are more intriguing, such as "Many a woman has come stooping in here no matter how pompous a person she was".

A guide gives you an excellent overview of the chamber's mysterious architectural attributes, but the fact remains that the history of this extraordinary place is still largely unsolved - something that obviously adds to the site's attraction. Unfortunately, you do not get the chance to spend very much time in the chamber, so you are unlikely to uncover any great secrets.