The best preserved stone age village in Europe: an extraordinary insight into life 5000 years ago. 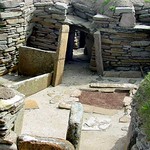 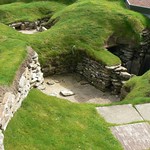 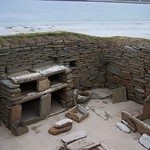 South of Birsay, eight miles north of Stromness, in the magnificent setting of the dazzling white sands of the Bay of Skaill, is Skara Brae, the best-preserved Stone Age village in northern Europe. First revealed in 1850 after a violent storm blew away the dunes, the site dates from around 5,000 years ago and was occupied for about 600 years.

The houses contain stone furniture, fireplaces, drains, beds, dressers and even have damp-proof coursing in the foundations. The whole complex presents a unique picture of the lifestyle of its inhabitants, and there's also a replica 'house' that you can enter, and wander around in through the gloom, empathizing with that 3000 BC lifestyle. The swish, modern visitor centre has a useful introductory video and exhibition which is definitely worth seeing before you look round the site (and it's also worth buying their guidebook). After leaving the visitor centre, you walk down a 'path of time', which takes you back through landmark achievements of the last seven millennia, gradually building up the suspense and putting the achievements of Skara Brae in perspective - they may only be rudimentary buildings that once had turf for their rooves, but they were built 2000 years before the pyramids of Egypt, and in one of the world's most northerly outposts.

During the summer a ticket to Skara Brae includes admission to nearby Skaill House, an early 17th-century mansion which contains a few old artefacts, including Captain Cook's dinner service from the Resolution, but is a bit of a let-down after what you will have just witnessed, not 300 yards away at Skara Brae.