Another beautiful Northern beach to the east of Durness but with a sad story associated with it. Short walk from A838. Easily accessible. 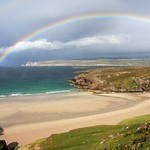 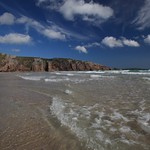 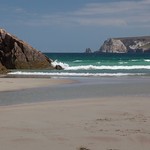 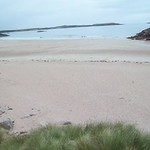 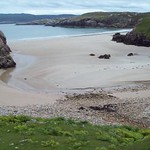 Translated from gaelic Ceannabeinne means head or end of the mountains. Traditionally the beach was known as Traigh Allt Chailgeag - the beach of the burn of bereavement and death. This name referred to a story of how an elderly woman fell into the burn, which flows onto the beach, and drowned. The burn Allt Chailgeag, was in spate at the time and her body was washed down to the shore. The ruined stone dykes visible by the burn and shore were part of the small farm of Clais Charnach, the foundations of which can be found on the hillside above the car park. Along with other townships in this area, the tenants were forcibly evicted to make way for sheep farming in 1842.

There is a small island out to sea called Eilean Hoan ( the burial island). The word Hoan etymologises from the Old Norse How-ey, and Eilean is the Gaelic for island. Being of limestone it provides rich pasture and once was home to four windswept families until the Clearances. It is now a National Nature Reserve.

Car Park off the main road