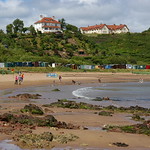 The beach has received the Seaside Award which is for beaches that are more rural in character, being quieter and less developed. The Marine Conservation Society have also awarded the beach its top award for cleanliness in 2006, 2007, 2008 2009 and 2010.

In 2010 the beach was awarded the prestigious Blue Flag. There is a cafe, toilets, disabled access and car parking.

The beach, which is approximately 200 metres wide, is well sheltered by headlands to the north and south with rocky sections at both extremities of the sand. The beach is popular with surfers and bodyboarders and lifeguards are on duty during busy summer periods. The beach has many beach huts some of which are believed to be 100 years old. The huts are leased from the Scottish Borders council who own the sands.