Old ruined castle near Duntulm on Trotternish Peninsula in a fantastic position facing North West over the sea. 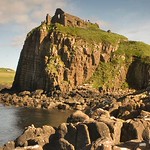 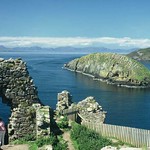 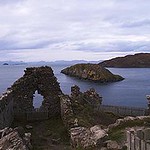 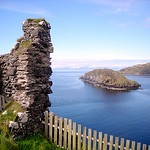 The castle was built in the 14th and 15th centuries, when the area was subject to feuds between the rival MacLeod and Macdonald clans. The defences were improved in the 16th century, and by the early 17th century the Macdonald's had finally gained the upper hand in the area. In 1618 the Privy Council and Sir Donald Macdonald of Sleat, "Donald Gorm Og", the 9th chief, signed a charter, requiring him to repair Duntulm. This was done, and a second tower was added. Around 1650, the castle's importance peaked, when further improvements were made, and a rectangular structure or house was built within the wall. Around 1732 the castle was abandoned, when Sir Alexander Macdonald built a new residence, Monkstadt House, 5 miles to the south, robbing much of the castle's stone as building material.

Open throughout year. Simply wander up. However, the castle structure is unstable with rocks falling so take great care.

Park on rad by the sea. There is a well worn path to the castle.