Visitor guide to Elgin in the North East coast of Scotland. Includes info on transport, accommodation, self catering cottages, eating and even info on Lossiemouth to Burghead. 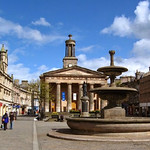 Nine miles west of Fochabers and 38 miles east of Inverness, is the busy market town of Elgin, which dates back to the 13th century. Elgin has retained much of its medieval streetplan, making it one of the loveliest towns in the country. There's also a good range of shops, and banks with ATMs, in the town centre.

The best place to eat in town is the Mansfield House Hotel. There are plenty of cheaper places in town, including Littlejohn's, 193 High St, a Tex-Mex/Cajun restaurant chain that's child-friendly. Nearby, at 181 High St, is Ca'Dora, a fish and chip shop. Gordon and McPhail, 50-60 South St, is an excellent deli, with a lip-smacking variety of fine foods and a huge range of malt whiskies. A good pub is the 17th-century Thunderton House, in Thunderton Pl, off the High St.

The train station is about 750 yds south of town, on Station Rd, off Moss St, which runs south from the High St.

A96 Aberdeen to Inverness | A941 Lossiemouth to Rhynie

The main tourist attraction is Elgin Cathedral, on North College Street, round the corner from the tourist office. Though partially ruined, the scattered remains still bear testament to what was once a majestic and beautiful cathedral. Founded in 1224, the cathedral was considered the finest in Scotland until 1390 when it was burned to the ground by the big, bad 'Wolf of Badenoch', the name given to Alexander Stewart, the illegitimate son of Robert II, following his excommunication by the bishop. And if that weren't bad enough, it was rebuilt, only to suffer further damage during the orgy of vandalism that followed the Reformation. There are still some 13th-century features remaining amongst the ruins, particularly the Pictish cross-slab and the octagonal chapterhouse. Apr-Sep Mon-Sat 0930-1830, Sun 1400-1830; Oct-Mar Mon-Wed and Sat 0930-1630, Thu 0930-1200, Sun 1400-1630. Tel. 547171.

A new distillery not yet on the Malt Whisky Trail is Glen Moray Distillery, on Bruceland Road on the western outskirts of town. Tours all year every hour 0930-1530 Mon-Fri (Sat Jun-Sep).

Two miles north of Elgin is Spynie Palace, the residence of the Bishops of Moray from the 14th century till 1686, when they were abolished in the Scottish Church. The palace is now a ruin, though the massive tower built by Bishop David Stewart remains, affording spectacular views over Spynie Loch and the Moray Firth. Apr-Sep Mon-Sat 0930-1830, Sun 1400-1830; Oct-Mar weekends only till 1630.

Six miles southwest of Elgin, set in a sheltered valley, is the giant hulk of Pluscarden Abbey. The abbey was founded in 1230, but in 1390 became another victim of the incredibly vengeful Wolf of Badenoch (see above). It recovered, but then fell into disrepair after the Reformation, until 1948 when it was rebuilt by an order of Benedictine monks, who still inhabit the abbey, making it the only medieval monastery in Britain that still houses a monastic community. Today it is a residential retreat for men and women and is open all year round. It has 26 single rooms and two doubles. Maximum stay stay is two weeks and charges are by donation. There are also guided tours. Daily 0445-2045. Free. Tel. 890257, www.pluscardenabbey.org

There are regular buses to Lossiemouth and Burghead from Elgin.

Six miles north of Elgin is Lossiemouth, funnily enough at the mouth of the River Lossie. The old fishing port is blessed with two fine beaches, to the east and west of town, and an excellent golf course, making it a popular seaside resort in summer. The town's real claim to fame, though, is as the birthplace of James Ramsay MacDonald (1866-1937), Britain's first Labour prime minister. Between 'Lossie' and Burghead, south of the coast road, is the scattered village of Duffus. The old part is home to a ruined 14th-century motte and bailey castle and an interesting 13th-century church, while the newer part is better known for its close neighbour, Gordonstoun School, the public school favoured (but not necessarily loved) by the royal family.

Six miles west of Lossie is the fishing village of Burghead, ancient Pictish capital of Moray and site of an important Iron-Age fort. The only real surviving feature is the well in King Street (key from No 69 King Street). The village gave its name to the Burghead Bulls, a series of remarkable Pictish stone carvings, some of which can be seen in the Elgin Museum (the others are in the Royal Museum in Edinburgh and the British Museum in London). The old Pictish New Year is still celebrated in the village on 11 January, when a burning tar barrel - the Clavie - is carried around. To the west of the village a wide sweep of sandy beach stretches all the way west to Findhorn. There's a good chance of seeing the Moray Firth's resident population of bottlenose dolphins from here.

There are a few campsites between Lossiemouth and Burghead. A couple of miles east of Burghead is Hopeman Sands Caravan Park, Tel. 830880, open Apr-Nov; and overlooking the beach to the west of Lossiemouth there's the Silver Sands Leisure Park, Tel. 813262, open Apr-Oct.

A good pub for food is Skerry Brae, on Stotfield Rd.

There's a wide range of Accommodation in Elgin. Best of the hotels is the Mansion House Hotel, The Haugh (north of the High St, overlooking the river), Tel. 548811. 23 rooms. Full leisure facilities and a good restaurant in an elegant and comfortable town house.

Also recommended is the Mansfield House Hotel, on Mayne Rd (1 block south of the High St), Tel. 540883. 21 rooms. Centrally located, elegant town house. Its restaurant is very popular with locals and reputed to be the best in town (expensive).

For something a bit different, there's The Old Church of Urquhart, Tel. 843063, a converted church in the tiny village of Urquhart, 5 miles east of Elgin, off the A96 to Aberdeen.

Self catering Cottages Near Elgin