Site of castle. The present Pitmedden House is a 17th-century house, remodelled in 1853 and in 1954, and may also incorporate part of an even older building. The castle was a property of the Setons, then the Bannermans in the 17th century, then the Keiths. 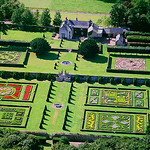 The house has an extensive 17th-century five-acre walled garden, which is open to the public, and features sundials, pavilions and fountains dotted among formal flower beds. There is also the Museum of Farming Life and visitor centre, as well as a wildlife garden and woodland walk.

Pitmedden Garden is one of the most spectacular and distinctive gardens in Scotland, which is a recreation of the spectacular "Great Garden" that was first set up in 1675 by Sir Alexander Seton to accompany his house at Pitmedden. In 1807 Pitmedden House was hit by a devastating fire that destroyed  most of the house and contents, including any records which might have existed on the original design of the garden. Pitmedden House and Garden were passed to the National Trust for Scotland in 1952 by its then owner, Major James Keith.

The garden has  broad lawns, finely sculptured hedges and well regulated trees that is laid out in a formal and symmetrical pattern. The garden is grass beds in interesting patterns and areas filled with colored gravels rather than plants, producing a striking  variation on the theme. The  garden has at present over  40,000 annual plants  which are raised the garden's glasshouses and planted out each spring  and  a huge collection of herbs like  lavender and  chives.

The Museum of Farming Life, an excellent museum housed in a number of buildings just to the north of Pitmedden House is another attraction. There is a huge collection of  agricultural machinery, workshops and a farmhouse that is set up as they might have appeared  in the 1800s, and stables complete with all the fittings. The nearby farm buildings house a wide range of agricultural machinery, workshops and even a bothy in which agricultural workers would have lived.