Crescent of rocks that stretch out from Seacliff Beach and whose tip is marked with large cross that recalls St Baldred. 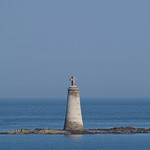 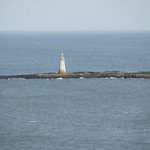 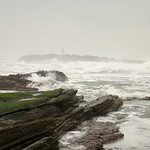 St. Baldred's Boat is certainly not a boat, but the name given to a dangerous rocky outcrop which juts into the sea north of Seacliff beach and east of Tantallon Castle. It is believed that St. Baldred lived in this area from about 700 to 6 March 757 A.D. St Baldred seems to have become a monk at the monastery on the tidal island of Lindisfarne in Northumberland, though by some accounts he was born in Ireland. At some point in the first half of the 700s he established a monastery at Tyninghame which owned large estates covering much of the coastal plain of East Lothian. St Baldred himself undertook frequent retreats to a hermitage and chapel he had built for himself on Bass Rock. It is said that St Baldred died on Bass Rock and there was subsequently a dispute between the parishes of Auldhame, Tyninghame and Prestonkirk, about where he should be buried. The story goes that after a night of prayer, three identical bodies were found, each wrapped in its winding sheet ready for burial. The story was probably a later invention intended to explain why all three churches established shrines to Saint Baldred.