Langholm sits at the confluence of three rivers - the Esk, Lewes and Wauchope - on the A7, one of the main routes north to Edinburgh, and a less stressful alternative to the A74(M). The town of Langholm is the gateway to some of the most spectacular scenery of Southern Scotland. Deep rooted in history,  Langholm was the centre of the Border Reiver insurrections, akin to Scotland's 'Wild West'. During the 18th century Langholm became a thriving textile town and is still a major centre of the Scottish tweed industry. Local name is The Muckle Toon 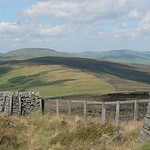 Langholm was the birthplace of the great Hugh MacDiarmid (1892-1978), poet and co-founder of the Scottish National Party. He is also buried here, against the wishes of the local nobs, who took great exception to his radical views. On the hill above the town is the McDiarmid Memorial, a stunning modern sculpture which looks like a giant metallic open book. A path leads for about half a mile to another memorial, from where there are wonderful views across the Southern uplands and the Solway Firth. A signed single-track road leads off the A7, about half a mile north of Langholm, to a path which leads to the memorials.

This is clan Armstrong country and the Clan Armstrong Trust Museum is a must for anyone with that particular surname. Neil was here, but we don't know if Gary has ever been. Info: Easter-Oct Tue-Sun 1400-1700. £1.50. Tel 380610.

Local festivals include the town's Common Riding(useful website), which takes place on the last weekend in July, the Langholm & Eskdale Festival of Music and Arts which is held in the last week in August, and the Eskdale Agricultural Show held at the end of September. The three day Langholm walking festivalthat is held in the month of June  conducts 12 guided tours in Langholm and Dumfries and Galloway.

The A7 runs north to Hawick and on to Edinburgh. It also runs south to Carlisle, via Canonbie, through an area known as the Debatable Land until the border was settled in 1552. From Canonbie the B6357 provides a more scenic alternative route to the Borders, running through lovely Liddesdale towards Hawick and Jedburgh. A shorter route to Liddesdale is to take the single-track road heading east off the A7 just to the north of Langholm, which joins the B6357 at Newcastleton.

The charming countryside around the Muckle Toon of Langholm is feted as one of Scotland's best kept secrets. There is a lot of exciting outdoor activities to do. Explore the moorland and woodland, see the vesteges of castle upclose or set out on an interesting wild life trail. The Moorland Education Projectfunded by the Scottish Natural Heritage will be a good option to understand more about the unique ecosystem of the moorland. The Eskdale Prehistoric Trail is another interesting activity that would take you back in time to the prehistoric past of Eskdale.

The best place to eat in this area is the Riverside Inn in Canonbie, Tel 371512, Langholm which serves superb pub food. It's also a good place to stay.

Another scenic route from Langholm to the Borders region is the B709. It runs northwest to the tiny village of Eskdalemuir, 14 miles from Langholm, then north through the Eskdalemuir and Craik forests to Ettrick, where it follows the valley of the Ettrick Water to Selkirk. About 10 miles north of Eskdalemuir is the Kagyu Samye Ling Tibetan Monastery. This Tibetan Buddhist centre was founded in 1967 for study, retreat and meditation, and incorporates the Samye Temple, the first Tibetan Buddhist monastery in the west. There are guided tours for visitors, regardless of faith (prices vary from £2-£5), and a programme of weekend courses and teachings. There's also a café and shops on site and pleasant walks through the gardens. Info: Daily 0900-1800 (tea room and shops 1000-1700). Bus No 112 from Lockerbie stops at the centre. Tel 373232.

Langholm is on the No 95 bus route between Carlisle and Galashiels, and buses pass through several times daily. Bus No 124 (Yellow Bus) runs between Langholm and Eskdalemuir, and No 112 (MacEwans) runs between Eskdalemuir and Lockerbie.

Broomholm Cottage is situated about one mile south of Langholm in Dumfriesshire, the A7 Tourist Route from Carlisle to Edinburgh. It is a secluded self catering accommodation at the end of a half-mile long drive which is solely shared only with Broomholm House. The cottage sleeps six in three twin bedrooms and is fully equipped for a comfortable stay. Ideal for fishing holidays. The property has 1 1/2 miles of single bank fishing which is divided into two beats with seven named pools on each beat.  Tel:013873 81262