Located at the end of Princes Street with outstanding, almost iconic views across the city. Nelson Monument stands atop along with Edinburgh's Disgrace. 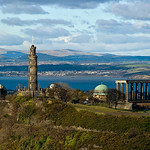 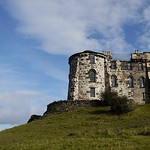 Calton Hill is one of Edinburgh's seven main hills. It is unmistakable with its Athenian acropolis  and the Nelson Monument rearing above the skyline.

The acropolis is an unfinished construction which was originally called the "National Monument". The project was initiated in 1816, a year after Napoleon's defeat at Waterloo in 1815, as a replica of the Parthenon in Athens, as a memorial to those who had died in the Napoleonic Wars.

Building itself began in 1822, but soon funds ran dry and celebrated Edinburgh architect William Playfair only saw a single facade of his building completed. Later, it was dubbed "Edinburgh's shame", but is now a popular landmark and it is a lot of fun for children and adults crawling up and down its giant steps.

Nelson Monument was build in 1807 after the death of nelson at Trafalgar in 1805 as a replica of his telescope and if you climb the 143 steps to the top it offers an outstanding view across the city, perhaps the best view as it includes both the Castle and Arthur's Seat as well as everything else in between.

The top of Calton hill is usually a quiet place to visit on any day, with its grassy slopes and panoramic views of the city, including down the length of Princes street (the main shopping thoroughfare) and Edinburgh Castle.

In August, Calton Hill is a hub for Edinburgh festival shows, it offers excellent views of fireworks displays from the castle during Hogmanay and the grand finale of the Edinburgh Festival, the Festival Fireworks. On the last day of April, Calton Hill is the scene of the Beltane Fire Festival.

Opinion: If you would love to savor a great view of the city of Edinburgh, then Calton Hill is the place for you. Rising beyond the east end of Princes Street, a short walk can take you up there. Go to the end of the buildings and climb the stairs up on the left. It carries with itself an exquisite collection of beautifully styled monuments and buildings, though the best part of the place is the awesome and panoramic view it gifts. If you have seen a beautiful view of the entire Edinburgh city only in photographs and pictures and would love to behold the same, then pack your bags and get to the top of Calton hill. Fabled Scottish buildings like the Palace of Holyrood and the Scottish Parliament Building can be spotted lying towards the foot of the hill. If its a sunny day you can view upto the Forth estuary. Gays love the place. Prettier at the night when you can literally see the city sparkling.

Calton Hill is easily accessed. It takes about five minutes to get to the top of the hill from a staircase at Regent Road on the South side, Royal Terrace on the North side, or you can drive up and park. There is a path right round the edge of the hill and a jumble of historic buildings and structures on top including, for star gazers, an observatory.