Small village on the west coast in Wester Ross on B869. Nearest village to SToerhead and the Old Man of Stoer. The village has a population of 60! 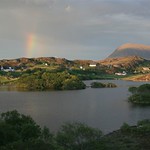 The village of Drumbeg lies within a few hundred metres of one of Scotland's earliest known shipwrecks, first surveyed in 2012 by Wessex Archaeology and thought to be a Northern European trading vessel dating to the mid-seventeenth century. Wreck remains include three iron cannons. The significance of this wreck has been recognised in its legal designation as Scotland's first Historic Marine Protected Area, making it an offence to interfere with the wreck without a licence from the Scottish Government, although divers may visit the site on a 'look but don't touch' basis.

Scenes of the short film, Zip 'n Zoo were filmed in Drumbeg. Several of the villagers even appeared in the film as extras.

There is a licensed local store - the Drumbeg Stores (website) who even do deliveries! They even have their own cask strength whisky!

The local road is very picturesque

Wonderful walking an cycling in the area with the local stores selling maps if you need them.

There is a hotel in the Village - The Drumbeg Hotel.