Lochbay Boathouse sits in a fabulous location on the seashore of Loch Bay in the north-west of Skye, and has its own small tidal harbour. This 18th century stone-built boathouse was converted into a two-storey house by the singer Donovan in the 1970s. 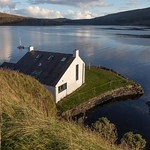 The house is completely on its own, and has no near neighbours, but is only a few minutes walk from the delightful village of Stein. The village contains the Stein Inn, which is the oldest inn on Skye, and serves excellent food, local real ales and a wide range of malt whiskies, and also the Loch Bay Seafood Restaurant, serving fresh locally-caught fish. The Boathouse is a perfect distance from the village: far enough away for privacy and peace, but near enough to go for an evening out without having to drive.

Lochbay Boathouse is a unique seaside house. It sits on the shore of Lochbay, on the Waternish peninsula, a few miles from Dunvegan, in the north-west of Skye. Built in the early 19th Century with thick walls of local stone, it was originally the boathouse for the Waternish Estate. In the early 1970's it was converted into a house by the singer Donovan and now combines modern comfort with the character of an unmistakably old building.

The furnishing style reflects the owners interest in the Arts and Crafts movement, with much of the furniture dating from the early 1900s. Many of the numerous paintings in the house are inspired by Scotland's rugged west coast.

Just beyond the harbour is a pretty waterfall, where the ladies from Waternish House used to picnic in Victorian times.

The views from the house are simply stunning: south eastwards to the picturesque fishing village of Stein, south westwards across Loch Bay, and north westwards towards the sea, with the islands of Isay and Mingay in the foreground and the distant mountains of North Uist beyond.

Seals, otters, dolphins, herons and eagles live nearby, and can often be seen from the windows and garden.

The house sits on its own at the foot of a grassy cliff, with its semicircular front lawn projecting into Loch Bay, and a small tidal harbour on its north west side.

Although the house is completely on its own, with no near neighbours, it is only a few minutes walk from the delightful village of Stein and lies within the Stein Conservation Area. The village contains the Stein Inn - the oldest inn on Skye - which serves excellent food, local real ales, a wide range of malt whiskies and also the Loch Bay Seafood Restaurant, serving locally-caught fish. The Boathouse is an ideal distance from the village: far enough away for peace and privacy but near enough to be able to go for an evening out without having to drive.

Other nearby attractions are the renowned Three Chimneys Restaurant at Glendale (15 miles away) and Dunvegan Castle, the 800 year old seat of the MacLeod clan chiefs (7 miles). There are frequent boat trips from both Stein & Dunvegan Castle and near Dunvegan is a beautiful white coral beach. The island's capital, Portree, with good shopping facilities, is about 25 miles away - a scenic drive of half an hour.

Your enquiry will go directly to the owners (or managers) of the property and they should get back to you very soon.

Location on the Map