The visitor guide to Isle of Skye Walks in Scotland's Inner Hebrides. The guide includes details and information on Portree, and other sightseeing attractions of the area like The Old Man of Storr, The Quirang, Elgol to Camasunary Bay etc. 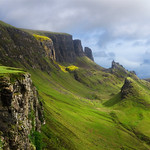 Walks on the Isle of Skye

Skye is one of the best places in Scotland for walking. The walks described below range from easy low-level routes to harder walks requiring a reasonably good level of fitness and a detailed map. As in the rest of the Highlands, you should be prepared for the worst and be properly equipped to cope with the wind and rain, even in the height of summer. Good hiking boots are also essential as the ground underfoot is likely to be boggy once off roads and tracks. The following link goes to a free online guide to walks on Skye

A nice, gentle introduction to walking in the area, and an opportunity to stretch your legs before tackling more strenuous routes such as the Old Man of Storr or the Quiraing, starts out from Bosville Terrace. Follow the street as it curves round then take the right fork at the first junction, down towards the shore. Just after the car park to the right the road splits: follow the path to the right along the northern shore of the bay. The path follows the shore and passes a viewpoint and flagpole. It then becomes rougher as it swings round the headland and reaches a gate in a dyke. Go through the gate and cross the muddy field, then follow the fence up to the left till you reach another gate. Go over the gate and continue along the edge of the next field, then cross a stile at the top of the field. Climb up the slope to the clear track and follow this left as it heads uphill. You'll then see some houses; take the track beyond the house on the left and follow it down between two large farm buildings. The path heads down across rough moorland towards Portree. Cross the stile and continue downhill through some woods, then you'll see a hotel on your left before rejoining the original road near the car park. It's about 2€ miles in total and takes about an hour and a half at an easy pace. The path can get very muddy in places. 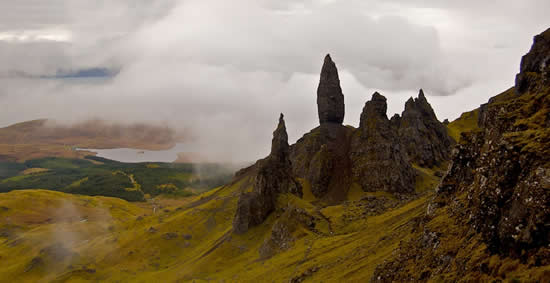 This dramatic basalt finger of rock, 165 ft high, stands beneath the steep cliffs of The Storr (2,360 ft) and is visible from the A855. The starting point for the 3€-mile walk up and back (1€ hours) is the car park on the left, just over six miles north of Portree, near the northern end of Loch Leathan, which can be reached by bus from Portree.

Cross the stile over the wall by the Forestry Commission sign and follow the clear track up through the conifer plantation. The track is a gradual uphill climb until you come out into open grassland. Go through the gate in the fence and then it's a steep climb up the grassy slope with the massive pinnacle towering overhead. Once at the top you enter an area of weird and impressive rock formations. You can follow any of the dozens of paths that lead between the rocks, or just enjoy the fantastic views across to Raasay and the mainland beyond. You can follow the same path back down to the car park.

This four-mile walk is quite demanding, but the dramatic scenery more than compensates. To get to the starting point, drive 19 miles north from Portree on the A855. At Brogaig, just north of Staffin, take the single-track road to Uig. Follow this for about 2€ miles and, just after the road has zig-zagged its way up the face of the ridge, park in the car park to the left.

Cross the road and follow the well-defined path along the base of the cliffs, with a steep grassy slope down to the right. After about one mile you'll start to see some of the well-known rocky features on the far side of a rough valley. The most imposing of these is The Prison, a huge, tilted square block. On the left, among the towering cliffs, is The Needle, a shaft of rock about 120-ft high. Scramble up the narrow gully to the left of The Needle to reach The Table, an area of flat grassland surrounded by high cliffs (local shinty teams used to play here!).

From The Table continue along the path at the foot of the cliffs, past a small lochan on the right and through a stone dyke, until you reach the lowest point of the ridge on your left. Scramble up on to the ridge and make your way back along the tops of the cliffs (take care at this point). There's a hard climb up the slopes of Meall na Suirmamach, but the views from the top are spectacular. Continue along the top of the cliffs for just over a mile and you'll see the car park.

This nine-mile coastal walk is quite demanding, but on a clear day the views of the Cuillins make it well worth the effort. It starts from the car park in Elgol. From the car park, walk back up the road for a short distance, then turn left along a track behind some houses, signposted for 'Garsbheinn'. Beside the last of these houses is a sign for the path to Coruisk. Follow this path along a steep grassy slope. The views across Loch Scavaig to the island of Soay and the Cuillins behind are marvellous. The slope gets even steeper beneath Ben Cleat, then comes the point where vertigo sufferers may wish they hadn't started.

This is the notorious 'bad step', an overhanging rock with a 30- ft drop to the sea below. Once you negotiate this, you then continue along the foot of Glen Scaladal and cross a burn, which can be tricky if it's in spate. Then it's on along the path beyond Beinn Leacach to Camasunary Bay. The shortest way back to Elgol is to retrace your steps (including bad ones), but as an alternative, follow the clear track from Camasunary up the right side of Abhainn nan Lean over the hills to the east until it joins the B8083 from Broadford. From here it's about 3€ miles back along the road to Elgol.