The red sandstone ruins of Arbroath Abbey dominate the small town on the east coast but in the past the abbey had a much wider importance in Scotland as a whole. 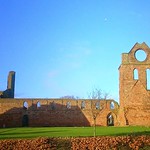 THE SPIRIT OF INDEPENDENCE

The red sandstone ruins of Arbroath Abbey dominate the small town on the east coast but in the past the abbey had a much wider importance in Scotland as a whole as Lorraine Wakefield discovers.

It is the site of one of the most significant moments in Scottish history when Scots noblemen affirming their independence from England signed the 1320 Declaration of Arbroath recognising Robert the Bruce as King but for many years visitors have overlooked Arbroath Abbey.

That is all set to change however with the opening of a new £1.8million visitor centre at the abbey which aims to attract more visitors to the Angus town and bring visitor facilities at the ancient monument into the 21st century.

The opening of the new centre will be marked with a weekend long celebration on 4 & 5 August with free entry for visitors and plenty of entertainment including a medieval market and street theatre.

The event is the culmination of three years hard work by Angus Council in partnership with Scottish Enterprise Tayside and Historic Scotland, with part funding from the European Regional Development Fund.

Council director of planning and transport Alex Anderson said it is hoped the new centre will give the abbey and the town a much needed boost in tourist numbers.

"The visitor numbers at Arbroath Abbey are relatively low compared to its significance in Scottish history and compared to the other abbeys and historical sites," he said.

"Somewhere like Jedburgh Abbey (in the Borders) gets 40,000 visitors a year while Arbroath Abbey only gets around the 8-9,000 mark.

"The aim is to try to boost those numbers as well as help Arbroath's tourist infrastructure and hopefully give a spin off for the town as a whole.

"The abbey is at the top end of the town and the harbour is at the bottom and both are seen as pretty important to the regeneration of the town centre.

"If we could get over 20,000 visitors a year that would be a big increase and we hope that this new centre will help bring those visitors," he said.

The visitor centre houses new interpretation and audio visual facilities to introduce visitors to the Abbey, explain its role in Scottish history and the architectural interest of the building and the facilities in the abbey itself have also been upgraded.

"Basically it is using modern techniques to tell the story of the abbey," continued Mr Anderson.

"Within the centre there is an upper floor which has windows that look over the abbey and a model of what the abbey looked like so visitors can relate what is there today, just a ruin, to what it was like in its heyday in full splendour.

"The rest of the centre contains audio visual displays that tell the history of the abbey, how it came about in the first place and how it came to be in the state it is in today.

"There have also been an upgrading and additions to the interpretative material in the abbey and the Abbot's House telling the story of the declaration to help people find it easier to understand the history of the abbey."

To mark the opening there will be free admission to Arbroath Abbey on 4 & 5 August and Mr Anderson said he hoped locals and visitors alike would take advantage of the celebrations to learn more about the history on their doorstep.

"This weekend entry is free and there is a range of things happening like the medieval market and official opening," he said.

"There is certainly an opportunity for all the locals and tourists to come and see what is on offer."

The streets and courtyard around the abbey entrance will be filled with colour and spectacle over the opening weekend when Angus Provost Frances Duncan will officially open the new centre.

She too emphasised the importance of the abbey's role in history saying, "Arbroath Abbey has long been associated with the signing of the Declaration of Arbroath in 1320, when the nobles of Scotland affirmed their independence form England and their support Robert the Bruce as their King.

"The profound effect of this stirring document in Scotland and beyond is examined in the new visitor centre putting Arbroath Abbey back where it belongs as one of the top historical sites in the country.

"I hope that local people and visitors alike take advantage of the weekend's free admission to come along and join in the celebrations on what is a momentous occasion not just for Angus but for all of Scotland."

New in 2014  - A new display tells the story of the day the Stone of Destiny came to the abbey in 1951. New interpretation panels also explore potential links between the Declaration of Arbroath and the American Declaration of Independence. (see National Archives of Scotland page on the Declaration).