Original castle was built in the late 15th century and it was dilapidated in the 1970s until the then owner of Harrods purchased the estate and conducted a painstaking renewal of the property. It is his private residence now. 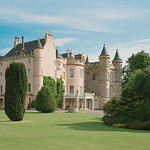 The castle was originally built by Hugh Ross who was married to Robert the Bruce's sister and has been a hostage of the Bruce as vouchsafe of his father's behaviour. The house passed through various relatives over the centuries until it was left unoccupied in 1942 and then fell into some disrepair until its purchase in 1972.

It has been much restored and is now a snazzy private residence for the Al-Fayed family.

Not open but there are private estate cottages which are rented out as holiday lets.