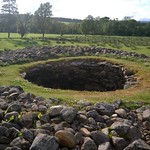 This was an ancient burial site and is in remarkable condition considering its age. It is free to visit and is a great stop off from the road (A831).

The cairn at Corrimony is a large circular mound of water-worn pebbles and boulders, within a kerb of larger stones set on edge. At the centre of the cairn is a round chamber, which would once have had a corbelled roof completely enclosing it.

A long, low passage runs from the edge of the cairn through to the chamber – the roof of the passage at Corrimony is very well preserved. Like the Clava Cairns, its passage faces towards the south-west – it may be aligned with a celestial event, but this has not been investigated. The whole cairn is surrounded by a setting of 11 standing stones, forming a circle around it.

The cairn’s roof was probably capped with the large slab now lying on top of the cairn. The slab is decorated with a series of cup-marks, which are typical of prehistoric rock art. Similar markings were found at Clava Cairns.

Excavation in the chamber revealed traces of a crouched burial, probably a woman, beneath an area of stone floor. No artefacts were found with the burial, but a bone pin was found elsewhere in the cairn.

The similar Clava Cairns have been dated to about 2000 BC. It’s likely Corrimony dates to about the same time.

Clava-type cairns such as this one appear to have been built in places that were suitable for settlement, on good land. Earlier burial monuments tended to be at the edge of agricultural land and set apart from settlements. This probably reflects changes in society and attitudes towards the living and the dead.

Just off the A831 between Balnain and Cannich in Glen Urquhart.