This medieval chapel which dates back to the 15th century was founded on a small hill above the Roslin Glen by William Sinclair, 1st Earl of Caithness. 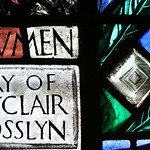 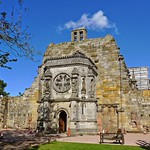 Perched above the North Esk, the magnificent and unique chapel has a richly carved interior full of Biblical representations and pagan and masonic symbols and has been described as "a fevered hallucination in stone". Foundations were laid in 1446 for a much larger church which was never built. What exists is the Lady Chapel, inspiration of Sir William Sinclair, who himself supervized masons brought from abroad who took 40 years to complete it to his design. According to legend, his grandfather, the adventurer Prince Henry of Orkney, set foot in the New World a century before Columbus. This is backed up by the carvings of various New World plants. One of the most fascinating sights in the church, and the most elaborate carving, is the Prentice Pillar. Legend has it that while the master mason was away in Rome making additional drawings to complete the pillar, an apprentice finished it for him. On the mason's return he murdered the apprentice in a fury.

Speculation as to the purpose of the chapel dwells on esoteric secrets and a plethora of recent books claims that the Holy Grail, supposedly brought from the East by the Knights Templar, is buried here. Whether or not you believe this, you'll still find its architecture and atmosphere fascinating. Once you've seen the chapel, there are some very pleasant walks in nearby Roslin Glen, from where you get great views of Roslin Castle. Take one of the regular buses for Penicuik from St Andrews Sq.

A number of tours stop here as well as a regular bus service from central Edinburgh. Go to bus station for more details.