Pictish stone dating from 800AD and now protected by glass case. Walk from road. Exceptional markings and documentation make this very interesting and worth visiting. 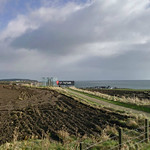 Also known as Clach a' Charridh

The exact purpose of the stone is unclear although there are a number of examples of standing stones in the area. The Shandwick Stone is part of a triad of stones found along the eastern coast of Ross-shire within a few miles of each other. With the Nigg and Hilton of Cadboll Stones, they are said to be monuments to three Norse brothers whose bodies were washed up on the shore after a great storm. According to the folktale, they were trying to rescue their sister from the evil Earl of Ross at Balnagown Castle.

Drive south from the village of Shandwick, you shouldsee glass case to the right.