Canonbie is a picturesque village situated on the River Esk. 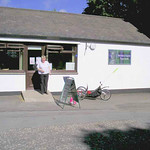 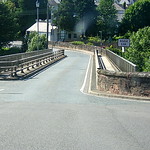 Although there is a lot of history in the area, much of it has eroded away in terms of visitor attractions. This was at the heart of the debatable lands which was the strip of land claimed by both Scotland and England which turned into a lawless land largely controlled by the Reivers. The area was pacified by King James V with the "execution" of Johnnie Armstrong and the destruction of many local strongholds and castles. They are dotted around the area in various states of complete disrepair.

To the south lies "Scots Dike" a four mile long earthwork which was constructed in 1522 to settle the dispute over "Debatable Land". Hollows Tower is an example of a fortified house.

Aside from local hotels, there is the Reivers Fayre Tea Rooms which offers tea, snacks and light mealand is popular with local and the passing trade.

Travelling north, leave the motorway and join the A7 to the north of Carlisle. This etremely pretty road carries you high over the Border lands including Langholm and then onto Hawick. If you have the time, this route is far preferable to the rather boring A74M.