Guide to Culloden Battlefield to the East of Inverness. 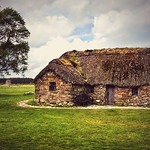 The eerie and windswept Culloden Moor, five miles to the east of Inverness on the B9006, was the site of the last major battle fought on the British mainland. The Jacobite cause was finally lost here, on 16 April 1746, when the army of Prince Charles Edward Stuart was crushed by the superior Government forces, led by the Duke of Cumberland, whose savagery earned him the nickname 'Butcher'. Now owned by the National Trust for Scotland, Culloden is a melancholy place and by far the most painfully evocative of Scotland's battlefields, particularly on a bleak and windy winter's day.

The battlefield has been restored to its original state (minus the dead bodies). The Visitor Centre is the obvious starting point and gives a graphic audio-visual description of the gruesome episode. From the Visitor Centre paths lead across the field to the clan graves, marked by simple headstones which bear the names of the clans who fought. Next to the Visitor Centre, the restored cottage of Old Leanach - which was used by the Jacobites as a headquarters, and where 30 Highlanders were burnt alive - is now a museum. A memorial cairn, erected in 1881, is the scene each April of a commemorative service organized by the Gaelic Society of Inverness.

To get there by public transport, Highland Country Bus No 12 leaves from Inverness Post Office Monday-Saturday (last bus back at 1928). It's a 10 min walk from the final drop-off point to the visitor centre. It's worth calling T01463-710555 to check whether they can drop you closer to the site.