The ancient royal burgh of Linlithgow is fairly equidistant between Falkirk in the west and Edinburgh in the east. There are a number of interesting sights in Linlithgow as well as in the surrounding areas including the hillside town of Boness which lies roughly four miles north of Linlithgow. 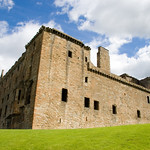 Halfway between Falkirk and Edinburgh is the pleasant little West Lothian town of Linlithgow, home of the magnificent Renaissance Linlithgow Palace, one of the most romantic and impressive historic buildings in Scotland. It's off the beaten track and relatively little-visited but well worth the detour, for this is a real gem. The 15th-century ruin is set on the edge of Linlithgow Loch and is associated with many of Scotland's main historical players, including James V (1512) and Mary, Queen of Scots (1542), who were both born here. James V was also married here, to Mary of Guise, and Bonnie Prince Charlie popped in for a visit during the 1745 rebellion. One year later the palace was badly damaged by fire during its occupation by General Hawley's troops, prior to their defeat by Jacobite forces under Prince Charles at the Battle of Falkirk. The ruin still conveys a real sense of the sheer scale of the lavish lifestyle of the court, from the ornate fountainin the inner courtyard to the magnificent Great Hall with its massive kitchens. Apr-Sep daily 0930-1830; Oct-Mar Mon-Sat 0930-1630, Sun 1400-1630. Tel. 842896.

On the High Street is the Linlithgow Story, which relates the history of the royal burgh. Easter-Oct daily 1000-1700.

West of town, at Cairnapple Hill, are ancient stone circles dating from around 2500BC to 500BC. Details of how to get there from the Tourist Information Centre, in the Burgh Halls at The Cross. They will also provide details of accommodation, though Linlithgow is easily reached from Edinburgh and Stirling. The best place in town for a bar lunch (and a good pint of ale) is The Four Mary's, on the High Street. Tel. 844600. The tourist office is open Easter-Sep daily 1000-1700.

North of Linlithgow, at Bo'ness, is the Bo'ness and Kinneil Railway, a privately run steam railway. Steam trips are arranged throughout the year, and there are also restored locomotives and carriages to see at Bo'ness station. (Tel. 01506 822298.)

To the East of Bo'ness with views of Culross is the ship-shaped Blackness Castle on the Edge of the river Forth.

At the station in Boness you can look around the Scottish Railway Exhibition (11.30am-5pm on train service days only; £1) showcasing carriages, wagons and locomotives.

If you are visiting the place in summer, the Bo'ness and Kinneil  railway runs steam trains to Birkhill, which is sited about three miles away (£5 return). Once there, you can wander along the wooded Avon Gorge or rather take a guided tour (might take you an hour or so) through the Birkhill Fireclay Mine where visitors can spot 300 million-year old fossils lining the walls (there are four tours offered a day; coincide with train times; £3). [2015 - presently the mine is closed - see website]

The village of Blackness lies along the coast of Bo'ness , four miles northeast of Linlithgow. Blackness once served as Linlithgow's seaport and is also the location of the impressive fourteenth-century Blackness Castle (April-Sept daily 9.30am-5.30pm, Oct-March Sat-Wed 9.30am-4.30pm; last admission 30 mins before closing, £4)

Regular buses from Stirling and Edinburgh stop at The Cross. The train station is at the southern end of town. There are hourly trains to and from Edinburgh (20 mins), Glasgow Queen Street (30 mins) and Stirling (35 mins).

A good business hotel not far from Linlithgow, is the Cairn Hotel at Bathgate. Close to the motorway; nothing special but very good value.