Quiet swimmable loch and black sands and a grea deal of history. 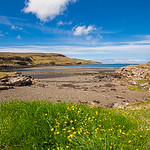 The black sand might make this beach look unappetising when there are so many wonderful coral beaches in Scotland. But the protected sea loch makes this eminently swimmable and a refreshing break from a hot walk. There are no facilities on the beach but then we go to beaches for the quiet and the sounds of the sea.

There is a large cairn to commemorate the dead from the Battle of Glendale on 1492 (see link) which may or not have happened but gave rise to the legend of the Fairy Flag of Clan Macleod. This was also the site for the rising of the "Glendale Martyrs" who rose up against their landlord who was attempting to evict them from the land to make way for sheep. John Macpherson was jailed for his role as leader of the revolt after a RN ship was sent to Skye to effect his arrest - see short summary.

When you strip and swim in the waters, the surroundings may seem calm, but they have not always been.