Visit this perfectly preserved cruck frame cottage and get a glimpse of Scottish village life in the 19th century. 2 miles north of Killin 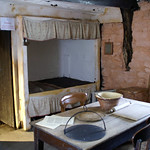 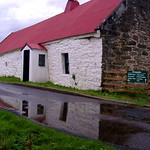 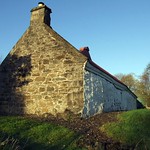 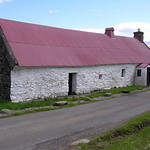 The building has hardly been changed and retains many of its original features, such as the 'hingin' lum' and box beds. Next door there’s an unusual collection of working clothes and 'Sunday best' which were discovered in the longhouse, and an exhibition on the history and restoration of the building.

A cruck or crook frame is a curved timber, one of a pair, which supports the roof of a building, used particularly in England and less commonly in Scotland. This type of timber framing consists of long, generally bent, timber beams that lean inwards and form the ridge of the roof. These posts are then generally secured by a horizontal beam which then forms an "A" shape. Several of these "crooks" are constructed on the ground and then lifted into position. They are then joined together by either solid walls or cross beams which aid with preventing racking. Racking is the action of each individual frame going out of square with the rest of the frame, and thus risking collapse.

Turn west down B road just south of Bridge of Lochay. Less than mile along on the right on road.