Killin is a picturesque village lying in the heart of the Scottish Highlands in the ancient district of Breadalbane. The village lies at the western tip of Loch Tay. 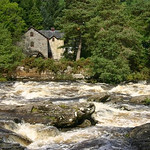 Killin sits at the base of the Tarmachan and Ben Lawers range of mountains. The Falls of Dochart flow through the middle of the village over the course of several miles. An eastern gateway to the Breadalbane area of the Loch Lomond and Trossachs National Park, Killin provides an ideal base to explore the Southern Highlands, from the busier National Park locations to the peace and quiet of the more remote glens.

There is much evidence in Killin and in the surrounding glens of Scotland's past, from distant Celtic legends to the days of the clans. The mysterious cup and ring marked stones in Glen Lochay provide evidence of very early settlement. There are many other ancient sites to be found throughout the area. These highlands were the homelands of the Campbells, McNabs, McLarens and the Macgregors of Rob Roy fame.

A827 Lix Toll to Ballinluig

The font in Killin Church is believed to be over 1,000 years old. The church itself was rebuilt in 1744, to replace earlier buildings dating to the 9th century. The first Minister of the new church was the Rev. James Stewart who translated the New Testament into Scottish Gaelic and whose ministry had far reaching consequences for the whole of Scotland.

Killin is a gateway to Scotland’s first national Park The Loch Lomond & Trossachs National Park .The southern regions of the Grampian National Park are also easily accessible from here.

The Breadalbane area of the LL&TNP takes its name from Gaelic, meaning “ the high country of Scotland” – and has some of Scotland’s most exhilarating mountain walks and climbs. Ben Lui, Ben Challum, Ben More, Ben Vorlich all tower above the landscape, with the majestic Tarmachan Ridge and the Ben Lawers range just to the north east of the Park. Breadalbane is home to some of Scotland’s richest wildlife.Golden eagles and peregrine falcons may be seen soaring over the higher peaks. The mountains can be treacherous and the weather conditions can change rapidly.

Killin is an ideal base for exploring the other areas of the Park – the Trossachs, Loch Lomond, Argyll Forest of the Cowal Peninsula – it is also centrally located for visiting many other destinations to the north, east and west.

The area offers a variety of pursuits for the tourist: walking on Ben Lawers, fishing for trout or salmon and watersports associated with Loch Tay itself.