Beauly is located on the north bank of River Beauly 10 miles to the west of Inverness in Scotland. The main attraction is Beauly Priory or the Priory Church established in 1230 by John Bisset. This attractive town got its name from the French word “beau lieu” means beautiful place. It is also said that the name came from a comment made by Mary Queen of Scots when she visited here, she was much impressed by the place. 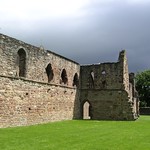 The sleepy little market town of Beauly is 10 miles west of Inverness, where the Beauly river flows into the Firth. It's a lovely wee place - hence its name. According to local legend, when Mary, Queen of Scots stayed here, at the priory, in 1564, she was so taken with the place that she cried (in French, of course) "Ah, quel beau lieu!" (What a beautiful place!).

Moving just three miles south of Beauly is located the Beaufort Castle, the chief seat of the Lovats. This fine modern mansion is built in the Scottish baronial style, and was established during the time of Alexander II, later it was besieged in 1303 by Edward I.

Apart from great historic past Beauly was also a centre for industrial activities with a range of different industries which were operating in Beauly from the mid 1700s when a distillery was opened here. After that many such distilleries functioned here with the time. One can also find few shops in this beautiful place which deals in antiques and other specialties.

The ancient town boasts many attractions for the visitors, the broad main square with the A862 passes through the centre of Beauly. Beauly is also known for the Beauly Shinty Club, which has won the Camanachd Cup three times and were the World Champions once. All these varieties makes it a worthy place to look for.

At the north end of the marketplace is the ruin of Beauly Priory, founded in 1230 for the Valliscaulian order, but like so much else of Scotland's ecclesiastical heritage, destroyed during the Reformation. Info - 11 June-30 Sep daily 0930-1830.

The A862 west to Beauly offers a more scenic alternative, and the chance to visit a 13th-century priory, and a distillery. South of Beauly, the A831 leads to two of Scotland's most beautiful glens, Glen Strathfarrar and Glen Affric.

There are Inverness Traction buses, Tel. 239292, every hour to Beauly, and on to Muir of Ord, from Inverness and from Dingwall. There's also a Ross's Minibus service from Beauly 3 days a week, Tel. 761250.

Four miles east of Beauly, at Balchraggan just off the main Inverness road, is Moniack Castle Winery, where you can try a whole range of wines, including elderflower and birch. Info - Mon-Sat 1000-1700.

The River Beauly is one of Scotland's best salmon-fishing rivers, and five miles south of Beauly at Aigas is a fish lift, where you can watch salmon bypass the dam with the aid of technology. Info - Mon-Fri 1000-1500.

There is an interesting local holiday company that offers

The most expensive place to stay is The Priory Hotel, on the main street, Tel. 782309. Late Rooms Availability for Priory Hotel in Beauly

The best food is at the Lovat Arms Hotel, which offers cheap meals in the bar or an expensive 4-course dinner in the restaurant. Otherwise, you could try the Beauly Tandoori on The Square, Tel. 782221, for a cheap curry; or the Friary for an even cheaper fish supper.