Tweet
The home to Gavin Maxwell where he wrote Ring of Bright Water and still a place of pilgrimage for visitors... 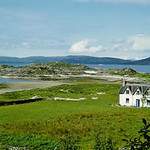 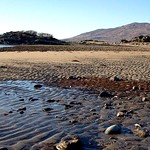 A small archipelago of islands to the south of Glenelg marks the location of Sandaig. The largest island in the chain has a lighthouse but there's no longer a lighthouse keeper's cottage nearby. That burnt down in 1968 ending the story of Camusfearna. Today, visitors to Sandaig can still see the location of the house, as a large boulder marks the last resting-place of its most enigmatic tenant.

Gavin Maxwell wrote the autobiographical account of his life with otters here and with the fame that followed the publication of Ring of Bright Water (and subsequent books Raven Seek thy Brother and The Rocks Remain), forever changed Sandaig, from a remote location with beautiful shell sand beaches to one of the most visited areas on the north west coast of Scotland.

Not much has changed in that time; the waterfall - the soul of Camusfearna to which Maxwell said he would return after his death - still roars during the winter months and the burn which gave the book its name, still meanders in a semi-circle to the sea.

As well as the graves of Maxwell and his famous otter Edal, (who perished in the fire which destroyed the house) there are still some tangible reminders of Maxwell's time here. The rusting boat trailer of his forty foot motor launch, Polar Star can be found in a corner of the field. The power cable and the poles, which arrived at Sandaig after the success of Ring of Bright Water and Raef Payne's cottage, all attest to a time that's now past.

The powerful imagery, which Maxwell's writing created, has drawn readers of his books to explore for themselves this remote corner of Scotland.