Steep stone bridge spanning the Tay built as part of campaign to connect the Highlands to allow the British army to quickly move to troublespots. Dates back to 1773. 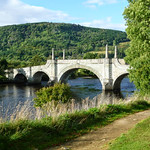 The River Tay is spanned by Wade's Bridge, built by General Wade in 1773 during his campaign to pacify the Highlands. Overlooking the bridge is the Black Watch Monument which commemorates the famous regiment becoming part of the British Army's peacekeeping force here, in 1739.