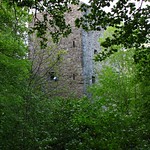 North through Fortingall, past the monument and bridge at Coshieville and at the T junction, turn left. About a mile up the hill towards Tummel bridge a view of the castle is obtained across the gorge on the left. The castle was built by Alexander Stewart - the Wolf of Badenoch, in the14th century. It is claimed that his enemies were done to death by being thrown from the ramparts into the gorge. It is also reputedly haunted by the wife of another later inhabitant Matiola who was murdered there as well.

After falling into ruin it was restored using the existing shell by a well known chocolate maker and was then used as a lodge for sporting activities. It was bought in 1996 by a family from the USA but who's roots are in Perthshire, who use Garth Castle as a holiday home for themselves and friends.

The castle was built by Alexander Stewart, the Wolf of Badenoch, Lord of Badenoch and Earl of Buchan, 4th son of Robert II. He torched Elgin Cathedral and town, as well as Forres, after being excommunicated by the Bishop of Elgin for forcing marriage upon his wife, the Countess of Buchan, then deserting her. He died here in 1396, and is buried in Dunkeld Cathedral.

In 1502 Nigel Stewart of Garth attacked nearby Weem Castle, burned it, and took Sir Robert Menzes prisoner. Stewart put Menzes in the valued dungeon at Garth, threatening to have him killed unless he signed away some of his lands. Stewart was nearly executed for the crime, only the intervention of the Earl of Atholl saving him. Stewart was later suspected of murdering his wife, Mariota, and was imprisoned in Garth until his death in 1554.

NOT OPEN to the public.