Excavated in the 1980s to its present state. Bronze and iron age on the coast north of Golspie. Large circulcar broch that is well worth a quick explore on a striking site beside the coast. 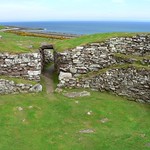 The surrounding enclosure contains the ruins of additional stone buildings

The broch was first excavated in the 19th century by the Duke of Sutherland, and was initially thought to be a burial cairn. Finds included pottery, flint chips, stone hammers, mortars and pestles, querns, whorls, shale rings, long-handled bone combs, a whale bone club, a silver fibula, steatite cups and an iron blade.

In 1909 the entrance passage was still visible on the east side of the broch, but by 1960 no structural features were discernible.

The site was excavated again in 1986. This showed that the site was occupied in the Bronze Age, before the broch was built. A Bronze Age cist burial with a food vessel was discovered. The foundations of many outbuildings were found in the enclosure surrounding the broch. Although many were clearly from a later period, some may have been contemporary with the broch

Travelling North, looks for signs to turn left. Travelling south, the sign is a hundred yards after the broch.