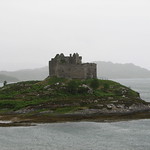 Readers of Nigel Tranter's wonderful chronicles of the life of Robert the Bruce will be familiar with this castle, as it was the home to the redoubtable and lusty Christina. When Robert the Bruce was at his lowest ebb, he retreated here and here the way. English propaganda declared that he had left the kingdom and forsaken his followers. The castle is now a ruin, but it requires little imagination to see how splendid it must once have been. Its location on its own tidal island must have made it difficult to besiege.

The castle was part of the McDonald's kingdom and was held by McDonald's until it was finally learnt to the ground by its owners in 1715 to ensure that it could not be used by the Hanoverian army. After the death of the chief of clan Ronald at the Battle of Sheriff Muir, it was never reoccupied.

Travelling to the castle requires a wonderful picturesque drive on the A861 before walking across to the loch where it is joined by the river Shiel.
As it is tidal, make sure you choose the right moment to cross.

Travel north on the A861, after passing Acharacle and crossing the River Shiel, take the next left onto small country road which travels most of the way to the loch.