Fake castle built in 1863 by Sir James Matheson (of Jardine Matheson fame) who resettled crofters to take the land.It has undergone a huge refurbishment. 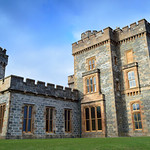 Lews Castle was built by Sir James Matheson in 1863 after resettling the crofters who used to live here. As the former laird’s house, it has long been seen as a symbol of old oppression: it was here, in the house’s now-defunct conservatory, that Lady Matheson famously gave tea to the Bernera protesters, when they marched on Stornoway prior to rioting. When the eccentric Lord Leverhulme took up residence, he had unglazed bedroom windows which allowed the wind and rain to enter, and so there were gutters added in the asphalt floor to carry off the water.

However, the building after being closed for over 25 years has undergone  a £14 million makeover. Part of the makeover includes a new extension to house a state-of the art bilingual museum, which is now open, telling the story of the islands’ geology, Gaelic culture, struggles of the nineteenth century and the Leverhulme era.

Lews Castle’s other attraction is its mature wooded grounds, a unique sight on the Western Isles, for which Matheson imported thousands of tons of soil. Hidden among the trees is the Woodland Centre, which has a straightforward exhibition on the history of the castle and the island, and a café serving soup, salads and cakes.

10am until 5pm Tuesday to Saturday.

Lews Castle overlooks Stornoway Harbour. Access by car is via Willowglen Road, off the A857, and for pedestrians via footpaths accessible from the bridge at Bayhead or further north at the former porter’s lodge.

If you are using a navigation system, our postcode is HS2 0XS.