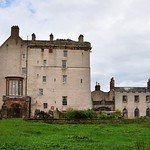 The Castle was built around 1049 and was owned by the Hay family for 650 years after being taken from the Earl of Buchan after the big battle of Bannockburn.

Similar to other Scottish castles, Delgatie was rebuilt in the late 16th century. Greater fortifications we needed and work done 1570 provided 8-16 feet thick outer walls. The main building dates from about 1100, while its final add on was finished 9 years later.

In May 1639, the covenanters were routed in their first skirmish with the Royalist Gordons. The battle happened on the 'Trot of Turriff' near the castle. This was what ended the 'Royalist' Hay of Delgatie who was hanged alongside the Earl of Montrose 11 years later in Edinburgh.

Around 100 years ago dry rot had infected the timbers and the deadly spores had eaten their way into the stonework. Part of the roof was destroyed and water pored down the internal walls. During the 2nd world war some of the 350,000 troops who were saved from the beaches of Dunkirk used the once elegent rooms as temporary barracks. By the end of the war the castle, left to crumble soon became derelect. Had it not been for Capt. Hay Delgatie would have dissapeared for ever. Even when the architects told the Captain it was too late to save the castle his determination to transform what was a rotting heap into the show piece restoration it is today began.

Both wings were added in 1743 with the chapel and dovecote on the west and the kitchen and servants' quarters on the east. Some of the rooms still boast their original 16th century painted ceilings, which are considered some of the finest in Scotland. Strange animals are depicted -- some with human heads thought to represent the actual inhabitants of the time.

Open everyday from 10am to 5pm; - Closed for 2 weeks over Christmas and New Year.

Located East of Turriff just of the A947