The visitor guide to the amazing ring of standing stones at Callanish on Lewis in the Outer Hebrides. 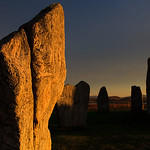 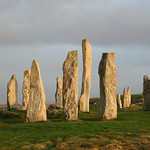 Five miles south of Dun Chàrlabhaigh is the jewel in the island's prehistoric crown, the Calanais Standing Stones, which are unique in Scotland and the equal of Stonehenge in historical value. The stones dates back to around 2900-2600 BC which means that they actually predate Stonehenge. The layout of the site is unique and emphasises that the site design is related  ins some way to astronomical events.

According to Patrick Ashmore, the foremost expert on Callanish:

The most attractive explanation … is that every 18.6 years, the moon skims especially low over the southern hills. It seems to dance along them, like a great god visiting the earth. Knowledge and prediction of this heavenly event gave earthly authority to those who watched the skies.

Archaeological excavation in the 1980s proved that the main circle was erected 4,500–5,000 years ago, and the chambered tomb a few generations later. It is important to remember that around 3000 BC the climate in the Western Isles was warmer than it is today and the sea-level lower. Salmon ran in the rivers, deer, sheep and cattle grazed the surrounding hills, and barley grew on the broad ridge where Calanais stands. A cult or religion seems then to have swept through the British Isles, involving the building of large earthen enclosures (henge monuments), and impressive circles of timber or stone.

The stones are in a beautiful setting overlooking Loch Roag and are very atmospheric, especially at sunset or at night, when no one's around. They are in the form of a Celtic cross, and in the centre is a circle of 13 stones with a central monolith over 12-ft tall, and a chambered burial cairn. The oldest part of this great ceremonial site - probably the stone circle - dates from around 3,000 BC (older than Stonehenge) and continued in use until about 800 BC.

The full significance of the site is not yet known, though it is probably connected to the seasonal cycle, as many of the stones are aligned with the rising and setting moon. There are also a number of smaller and more isolated stone circles a few miles south of Calanais on the road to Gearraidh na h-Aibhne (Garynahine).

By 1500 BC Calanais had been abandoned and the area inside the circle was levelled. This may have been just been the result of ordinary agriculture, but it is possible that it was some sort of ritual cleansing, thereby ensuring that no inconvenient ancestors would return! More importantly, the climate was changing around then too, and this part of Scotland was becoming cooler and wetter and presumably much less hospitable.

Between 1000 BC and 500 BC, the stones were enveloped by peat, and it was not until 1857, when the peat was cut, that their true height was once again revealed. In the landscape around the ring are at least eleven other stone circles and settings that hint at how important the area was to prehistoric peoples. The existence of Bronze Age monuments in the area imply that Calanais remained an active focus for prehistoric religious activity for at least 1500 years.

Next to the stones is the Calanais Visitor Centre, which features 'The Story of the Stones' exhibition, a restaurant and gift shop.

Aside from the Calanais Visitor Centre or Blackhouse tearoom, places to eat are few and far between, but try Tigh Mealros, a few miles south, at Gearraidh na h-Aibhne, Tel. 44 (0) 1851 621333. They serve good local grub in a cosy, relaxed atmosphere, with scallops a speciality (closes at 2100).