Dun Carloway is one of the best-preserved Iron Age Brochs in the whole of Scotland dating back to something like 1st century AD. It is near Callanish and should be visited. 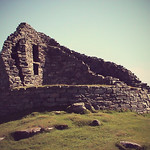 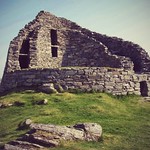 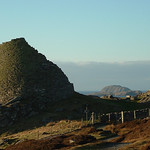 Positioned above a crofting township and close to a large sea loch, Dun Carloway, like the Standing Stones, is in the care of Historic Scotland. The origin of the broch and its precise use is still not clear. Brochs or Duns (which is a larger type of Broch and of which this is an example) are pretty much unique to Northern Scotland and were partly symbolic and partly defensive although they would have been relatively inefficient as a defensive structure.

This broch was in continued use until the 1600s when a local altercation between two families led to its partial destruction. Use of the stone for construction led to further damage before it was protected in the C19th.

The external diameter is 14.3 meters, the internal diameter of the inner courtyard is 7.4 meters. The walls vary in thickness from 2.9 meters to 3.8 meters from the southeast to the north. The entrance is located on the northwest side. The entrance is 75 centimetres wide and 1 metre high. The walls on this side of the broch do not exceed the entrance capstone. On the south side of the entrance-passage is a so-called "guard cell", a small side room in the hallway. The opening to the "guard cell" is 61 centimeters square. In the interior of the broch there are three additional openings. The opening on the eastern side, opposite the entrance, leads to the stairs located between the walls of the broch. The staircase runs along one quarter of the circumference of the broch. The northeastern opening (to the left of the staircase opening) gives access to an oval room. Here are traces showing that there were at least three peat ovens over the centuries. The west opening (right, after entering the broch) provides access to a room under the staircase

There is a 32 page book about the broch, written by Ian Armit and Noel Fojut is is available to buy online here, at the Calanais Visitor Centre or at the Broch Visitor Centre.

The broch is a few hundred yards down the road from A858. Buses from Stornaway stop at the junction and you can walk the last part. There is a good parking before the Dun and it is well sign-posted from the main road.