The well known Scottish architect William Adam designed Haddo House in 1732, it is located near Aberdeen and is a phenomenal example of an Scottish highland stately home. 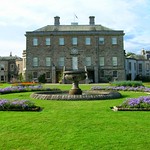 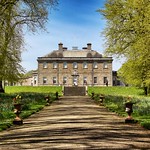 Haddo House is a large historic stately home situated near Tarves in Aberdeenshire, around twenty miles north of Aberdeen. It has been owned by the National Trust for Scotland since the 70's.

The Gordons, who later became the Earls of Aberdeen and Marquesses of Aberdeen, have lived on the site for over 500 years. Haddo House sits in or near the site of the old Kellie Castle, the family's previous dwelling which was burnt down by the Covenanters and dates from 1732; it was designed by William Adam in the Georgian Palladian style. The interior of the house though is late Victorian in style, having undergone refurbishment in 1880 by Wright and Mansfield. Haddo contains a large art collection, including a series of 85 castles by James Giles. There are also several portraits of 19th century British politicians.

It also has impressive collections of period furniture, ceramics and art, including paintings by Sir Thomas Lawrence and James Giles. The house is open for guided tours only but the grounds are open all the time. These include the formal terrace garden and Haddo Country Park, with its lakes, monuments, woodland walks and deer park.

Haddo House requires your own transport to get to.  It is located North west of Aberdeen just off the B9005