14th Century castle of the Irvine family and now National Trust. Wonderful gardens and you can visit inside the castle as well. One of Scotland's oldest tower house castles. 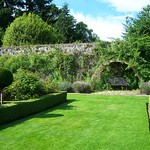 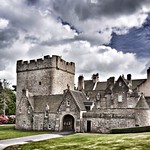 The original castle dates back to the 13th century and is one of the oldest tower houses in all Scotland. The castle has been renovated and the gardens extended, but it remains an absolutely classic instance of the ancient Scottish castle and a must visit for visitors.

Take in an enormous sweep of Scottish history as experienced by the Irvine family who lived in Drum Castle for over 650 years, from the 14th century onwards.

Drum is one of Royal Deeside’s most popular castle attractions, only 10 miles from the city of Aberdeen. It is one of Scotland’s oldest tower houses and is located next to an ancient oak woodland and a walled garden that holds a great collection of old roses which make the air really smelly (in a nice way).

William de Irwyn was gifted the Royal Forest of Drum and the Tower of Drum by King Robert the Bruce in 1323. The tower has benefitted from various improvements over the centuries, including a Jacobean mansion house extension in 1619 and Victorian adaptations, such as the impressive library converted from the lower hall.

Follow signs from the A93 bwteen Peterculter and Drumoak.