Set on a peninsula of the Moray coast north of Elgin surrounded by sea on three side. Known locally as the Broch and site of a largely destroyed Pictish fort. 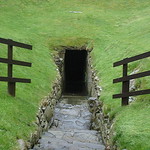 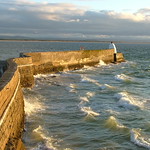 Like many local towns, employment is dependent on the two local RAF based at Kinloss and Lossiemouth whose jets regularly roar overhead, it is hard to predict what will happen if they close. Langoustine fishing used to be a big thing, but that is largely history now.

The main attraction is the remains of the Pictish fort on the headland which  is the oldest and largest in Scotland. The landward defences were destroyed in the building of the town, but the overall scheme still covers three hectares of ground. There is a covered cairn and the striking Burghead Bulls which are six carved slabs  can be seen in the visitor centre. (Opens at various times of year but mainly between 2-4pm. Visitor Centre Tel: 01343 835518)

Burghead bay is also home to the most northerly resident population of bottlenose dolphins in the world and the vantage point of Burghead Headland offers an unrivalled viewing point as the dolphins swim past. Their sheer size, speed and power can be judged by the spectacular leaps and somersaults which mark their passage past the headland.

The 130 resident bottlenoses are larger than any others in the world, measuring up to 3m (10 ft.) and weighing up to 300 kilos (5 cwts). It is probably this bulk that allows them to survive the cold waters so far north. However their survival as a viable population currently hangs on a precariously low breeding rate; only about 5 calves are born each year.

There is a regular bus service from Elgin via Duffus via Stagecoach Bluebird. The nearest train station is Elgin. Otherwise by road turn of the A96 and take the B9013 into Burghead.

There are a number of hotels and local self-catering accommodations.