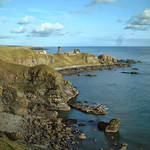 This was the site of the original Slains castle before it was replaced by the now more familiar castle at Cruden Bay.

The 13th-century castle was originally the property of the Comyn Earls of Buchan who were bitterly opoosed to the Bruce. After their forfeiture in the 14th century it was given to Sir Gilbert Hay by Robert the Bruce in recognition for his support against the English. Hay was one of Bruce's staunchest supporters. This gift was part of Bruce's campaign to break Comyn Moray.

In 1594, Francis Hay, the catholic 9th Earl of Erroll led a rebellion which was put down by James VI. The castle was destroyed with gunpowder and cannon. Today, one wall of the castle remains standing, at approximately 25m in height.

In the 1950s, a 3-storey house was built within the ruins, adjoining a fishing cottage built in the 18th century. Since 1991 several archaeological excavations have been effected, the last one in 2007

Walk up from road.

Drive along minor coastal road from Kirkton of Slains off B9003