These three peaks are on the main spine of the Mamores near the middle of the range.

These three peaks are on the main spine of the Mamores near the middle of the range. Am Bodach and Na Cruagaichean are fine peaks, the former having a steep east face above Coire a' Chairn and the latter having two peaks connected by a short narrow ridge. Between them, Stob Coire a' Chairn is a much more modest peak, being little more than a rounded swelling at the point where a narrow ridge goes north to An Gearanach. These three peaks are best climbed from Kinlochleven.

For those who want to save a little effort, it is possible to drive up to Mamore Lodge and park a car there for a small charge. Otherwise walk uphill from Kinlochleven by the West Highland Way and the access road to Mamore Lodge. From the lodge go west along the old road to Fort William for just over 1 kilometre and climb north-east to Sgor an Fhuarain and then north direct to Am Bodach. Descend north-east, very steeply at first, along the main ridge of the Mamores and cross a small knoll to reach Stob Coire a' Chairn. Continue south-east down a broad easy ridge to the col at the head of Coire a' Chairn where a stalker's path goes off down the corrie. Climb to the North-west Top of Na Gruagaichean and cross the gap to reach the highest point. Descend the south ridge for just less than 1 kilometre to its level part and then bear south-west down to the road at the foot of Coire a' Chairn. Return along this road to Mamore Lodge.

Activities in the Area 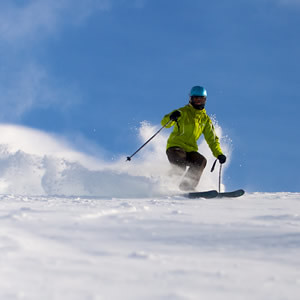 All year round resort beside Glen Nevis with a great range of activities from walking through to paragliding or mountain biking...