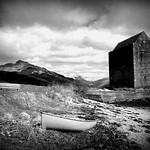 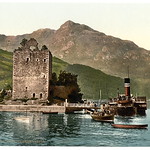 Carrick Castle was for a long time one of the main strongholds of the Campbells of Argyll and was held by them on behalf of the king. It was badly damaged in the 17th century and was later bought by the Murrays but was in an increasingly ruinous condition until it was purchased by Alex Fleming who has been restoring it and replacing the missing roof. It is now partially habitable and the new roof has roof lights.

The pier beside it is owned by the Ministry of Defence, but makes a neat spot to sit and watch the world go by.

It is privately owned now and not open internally.