The actual gothic castle was demolished in 1952 - what can be seen from the rivers edge is a wall and north tower that looks mediaeval, bit is not 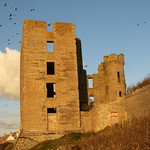 There have been a number of fortifications on the site which would presumably have protected the river which would afford safe harbour for vessels.

The present castle if just external walls and a rather impressive tower (alsmost ruinous). In the Victorian era, a gothic castle was constructed but this was later demolished.

During WW2 a sea mine exploded near the harbour and the castle became structurally unsafe although it is not known if these events are connected.

Viewable but not visitable