three miles north of Oban, standing on its own peninsula into the Firth of Lorn with a massive curtein wall. Ancient Campbell and MacDougall castle now in care oif Historic Scotland. Open to Public 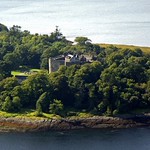 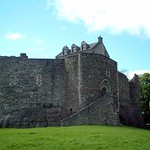 Dunstaffnage Castle is one of the oldest stone castles in Scotland. It guards the seaward approach from the Firth of Lorn to the Pass of Brander – and thereby the heart of Scotland. The castle was built around 1220, probably by Duncan MacDougall, son of Dubhgall, Lord of Lorn, and grandson of the great Somerled ‘King of the Isles’. These were stirring times in Argyll, because of the remarkable struggle between Scotland and Norway for control over the Hebrides.

The acquisition of the region by Scotland in 1266 did not see the end of warring; far from it. Mighty Dunstaffnage saw action during the Wars of Independence (1296–1356), and was famously besieged by King Robert Bruce in 1308, after his victory over the MacDougalls at the Pass of Brander, overlooking Loch Awe. Thereafter, Dunstaffnage remained a royal castle until it passed to the Campbells, earls of Argyll, in the 1460s. From then until the last Jacobite Rising in 1745–6, Dunstaffnage’s story is inextricably interlinked with the incessant struggles by the Crown and the Campbells to control their unruly western subjects.

In 1164, Earl Somerled was killed fighting the Scots. His eldest son, Dubhgall, became the next ‘King of the Isles’. Judging by the architecture, Dunstaffnage was built by Dubhgall’s son, Duncan, around 1220. (Dubhgall also founded the priory at Ardchattan, beside Loch Etive just six miles – 10km – east of Dunstaffnage.) His new stronghold consisted of a formidable curtain wall of stone, behind which sheltered the residential and service buildings. This brute mass of masonry still overawes visitors today. It had few openings in it, just some narrow vertical arrow slits.

Dubhgall’s son, Ewen, probably added the three projecting round towers, both to flaunt his power and to improve the castle’s defences. The gatehouse tower was later altered, but the other two stand much as built. Ewen’s great hall in the courtyard also partly survives.

Late in 1746, Dunstaffnage welcomed one of its more famous guests, Flora MacDonald. This gentle-mannered lady was visiting her brother in South Uist when she met Bonnie Prince Charlie, then fleeing from the Redcoats following his defeat at Culloden in April. Flora agreed to help him escape, and dressed him up as her serving-girl, ‘Betty Burke’. They crossed to Skye, from where the prince made his escape. Flora, however, was arrested and brought to Dunstaffnage. She remained there but a few days before being escorted to the Tower of London. She was released in the following year.

The castle is open all year and with it magnificent position is an absolutely fabulous place to stop for both the castle itself and sit beside the sea and look out at the surrounding landscape.