Elegant classical mansion outside Moffat once owned by Macadam famous for inventing tarmac. There is a roller he used still in the grounds. 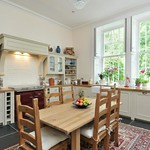 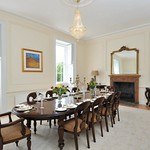 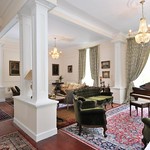 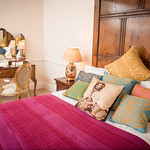 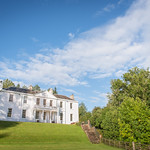 Dumcrieff Estate and Tower were granted to the Murray Family by the Duke of Albany, son of King James II of Scotland in 1482. After the tower was attacked and destroyed by the Glendinning family in retaliation for a raid on their settlement in Westerkirk, a smaller version of the current house was built on the site around 1684.

The estate was purchased by the doyen of Scottish Enlightenment, Sir John Clerk in 1727 and his son George, improved the estate by planning and planting the parkland and woodland surrounding the house as well as extending the house.

The estate was then sold firstly to Alexander Farquarson and then  to Colonel William Johnstone in 1783. Shortly afterwards, the house was rented for two years by John Loudon MacAdam, the famous pioneer of the road surfacing technique that still bears his name. The large sandstone roller used by MacAdam in perfecting his invention still sits in the grounds.

On the death of Colonel William Johnstone in 1792, the estate was sold to Robert Burns’s biographer Dr James Currie and was bought in 1806 by Dr John Rogerson - personal physician to Catherine the Great, Empress of Russia, for his retirement. Immediately following his purchase of Dumcrieff, Dr Rogerson commissioned and built the existing mansion house in the Classical style popularised by the Adam family at the time.

Dr Rogerson’s granddaughter Elizabeth inherited the estate and later married Lord Rollo. Following the First World War, the estate was bought by Rev. Adam Foreman and remained in his possession for about fifty years until his death at the age of 103. The estate was sold by auction in the early seventies and then re-sold to another family a few years later, who lived on the estate for some 20 years.

The estate was sold privately in 2008 to the current owners – a local family, who have ancestral connections to the estate dating back to the 15th Century.

The M74 Motorway J15 is just 4 miles from Dumcrieff