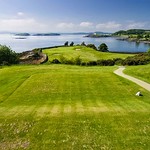 Either by train on ther Fife line from Dundee or Perth to Edinburgh or take A921 from the main A9 north of the forth road bridge.

Apart from its two fine beaches (even if the water is cold) there is Aberdour Castle (see below) and St Fillan's Church which is one of the best-preserved medieval parish churches in Scotland, dating largely to the 12th century. A south arcade was added to the nave in the early 16th century (open in summer).

The village is really two separate villages. Wester Aberdour has the more 'olde worlde' feel of the two, with the narrower through road (A921) hemmed in by shops and hotels. A number of vernacular buildings of the 17th-early 19th centuries add to the historic scene. Close to the railway bridge, three lanes continue eastwards, presumably once the route of the original High Street before the arrival of the railway. One now leads to Aberdour railway station, a beautifully kept and cared for example of a traditional station, in keeping with its role of transporting at least a quarter of the village's working population to their work each day.

A second lane leads alongside the railway line to Aberdour Castle, while a third leads to the restored Aberdour House. A little further west, a narrow road closely lined with high walls, Shore Road, leads down to the West Sands and the Harbour.

Another road leads coastwards from Easter Aberdour. Hawkcraig Road leads past St Fillan's Church and through Silversand Park, home to Aberdour Shinty Club, en route to the much better parking area on Hawkcraig. This was formerly a sandstone quarry and then used as the council refuse tip before becoming a carpark, part of the overgrown and rocky bluff separating Aberdour's two bays. From here is it a short walk to the Silver Sands, Aberdour's busiest and most popular beach. On the west side of Hawkcraig Point there is a short concrete jetty that was used as part of the development of radio controlled torpedoes during World War One. The foundations of the Radio Hut can still be seen in the lea of the hill.