This is the home of the East Neuk fishing fleet with a thriving fish market and harbour crammed with fishing boats. 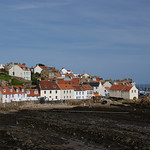 It is well worth rising early to come here and witness the landing of the catch. At the east end of the harbour is The Gyles, an attractive group of 16th- and 17th-century houses beautifully restored by the NTS and boasting some fine examples of Dutch-style gables.

The oldest house by far in Pittenweem is in Cove Wynd, which climbs steeply up to the High Street from the East Shore overlooking the harbour. In the seventh century the early Christian missionary, St Fillan lived here in a cave, dug deep into the rock. All through the middle ages pilgrims came to visit the cave. This primitive dwelling gave the town its name, for in the Pictish tongue, the word means 'place of the cave'. To visit the cave, collect the key from the Gingerbread Horse in the High St. Tel. 311495.

The pilgrims who visited the shrine received hospitality at the 12th-century Priory, established by Augustinian monks from the Isle of May. The remains can be seen in the Marygate, behind the Episcopal church. Nearby, in the High Street is the impressive 16th-century Parish church and Kellie Lodge, also 16th-century, town house of the Earls of Kellie and an excellent example of vernacular style architecture.

Three miles inland from Pittenweem, on the B9171, stands Kellie Castle, one of the oldest and most magnificent of Scottish castles. This is 16th- and 17th-century domestic architecture at its best, though the oldest part of the castle dates from 1360. Owned by the Oliphants for over 250 years, then by the Earls of Mar and Kellie, the castle was saved from ruin over a century ago by Professor James Lorimer. The interior is notable for its superb plasterwork ceilings, which were then the height of fashion. The castle's 16 acres of beautifully landscaped gardens were designed by Lorimer's son, Robert, who became a well-known architect specializing in restoration. Among his works is the Hill of Tarvit, near Cupar. His grandson, the sculptor Huw Lorimer, also lived here. Castle open Easter to end-Sep, and weekends in Oct, 1330-1730. Garden and grounds open Apr-Sep daily 0930-2100; Oct-Mar till 1630. Bus Nos 61A/B runs from St Andrews to Arncroach and passes the castle entrance four times daily, except Sun (1 hr

Self Catering Cottages in Pittenweem