Three miles northeast of Anstruther and 10 miles from St Andrews is the most ancient and picturesque of all Fife's Royal Burghs. Crail was once the largest fish market in Europe and for centuries its ships returned from the Low Countries and Scandinavia laden with cargo. Today you're more likely to see tourists than fishermen, but you can still buy fresh lobster and shellfish here. 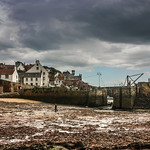 Centuries ago, the town's rich merchants built their handsome houses round the market place. At the far end of the Marketgate, is the Collegiate Church of St Mary, whose origin goes back to the 12th century. During the building of the church the Devil is said to have hurled a great boulder at it from the Isle of May. The boulder split as it flew through the air and one part landed only 30 m from the churchyard gate. It still sits there, bearing the Devil's thumbprint.

At the other end of the Marketgate is the Tolbooth, dating from the early 16th century, now serving as the town hall. In the striking Dutch tower is a bell dated 1520, cast in Holland. Also in the Marketgate is the Museum and Heritage Centre which shows much of the history of the town. Apr-May weekends and public holidays 1400-1700; Jun-Sep Mon-Sat 1000-1300 and 1400-1700, Sun 1400-1700. Free. There's a Tourist Information Centre at the Museum and Heritage Centre, Tel. 450869, open Easter-September.

Crail's real attraction, however, is its beautiful harbour, surrounded by whitewashed cottages with pan-tiled roofs and crow-stepped gables. It is one of the most photographed locations in all of Scotland and a favourite with artists. To reach the old harbour you go down the steep, winding Shoregate. At the foot of the Shoregate is the 19th-century customs house.

The 18-hole Balcomie Links golf-course, the Victorian walled Cambo Garden with a beautiful waterfall and Crail Pottery,are some of the other must see spots. Crail is best explored on foot. The pretty cobbled streets are lined with 17th century houses, the doors of which are marked with the initials of their owners or the date of a wedding. At the end of Nethergate overlooking the sea, is the Crail Priory Doocot, a 16th century structure which once housed doves for meat.

In Crail there's the Balcomie Links Hotel, a family-friendly hotel - some of the rooms have views over the Firth of Forth.