Known locally as Anster (pronounced enster), this is the largest of the East Neuk villages in Fife. 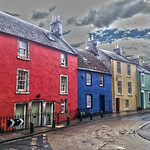 Today, it is best known as the home of the Scottish Fisheries Museum, but it was Scotland's main fishing port at the end of the 19th century, with almost 1,000 boats in its fleet.

Several hotels and pubs serve bar meals, including the Craw's Nest and the cosy Dreel Tavern, on High St West, while the Anstruther Fish Bar, on Shore St, does a mean takeaway fish supper. A restaurant of particular note is The Cellar, 24 East Green, just behind the Fisheries Museum, Tel. + 44 (0) 310378. The seafood here is among the finest in the country and will set you back around £50 for a 3-course dinner.

Like its neighbours, Anster traded with the Low Countries and Scandinavia, before becoming an important centre for herring fishing. This proud heritage has been well preserved in The Scottish Fisheries Museum, which faces the harbour on the site of the pre-Reformation St Ayles chapel. The museum, established in 1969, gives a fascinating insight into the life and work of a fishing community and is well worth a visit. There's also a fine collection of actual and model fishing boats, equipment, maps and compasses, as well as an aquarium. Apr-Sep Mon-Sat 1000-1730, Sun 1100-1700; Oct-Mar Mon-Sat 1000-1630, Sun 1200-1630. Tel. + 44 (0) 1333 310628.

[The North Carr Lightship that used to be moored in the harbour has now moved to Dundee.]

Three miles north of Anstruther, just off the B9131 to St Andrews at Troy Wood, is Scotland's Secret Bunker, one of Fife's most fascinating attractions. This was to have been the government HQ for Scotland in the event of nuclear war and was only opened to the public in 1994. In fact, part of the complex is still operational and remains secret, as do the equivalent centres in England and Wales. The approach is through an innocuous-looking farmhouse, then visitors descend via a huge ramp to the bunker, 30 metres underground and encased in 5 metres of reinforced concrete. The bunker could house 300 people and was to be fitted with air filters, an electricity generator and its own water supply. It even had a couple of cinemas, which are now used to show a rather frightening 1950s newsreel giving instructions to civilians on what to do in the event of nuclear attack. Aside from the café and gift shop, the bunker has been left exactly as it was in the 1950s. Apr to end-Oct daily 1000-1700. Tel. 310301, The direct St Andrews to Anstruther bus takes you to the turn-off for Troy Wood, then it's a 1-mile walk.

During the summer months boats from Anstruther visit the Isle of May, five miles offshore, guarding the mouth of the Firth of Forth. The approach to the island's impressive cliffs is spectacular. The island became a national Nature Reserve in 1956 and is home to a large population of puffins, shags, guillemots, razorbills and kittiwakes as well as seals. The island has an intriguing history. It was home to the Benedictine Priors who came in remembrance of St Adrian, the Christian missionary who was murdered there in AD 870 and the remains of whose chapel can still be seen. The first lighthouse in Scotland, built here in 1636, can also be seen. The present lighthouse was built by Robert Louis Stevenson's grandfather in 1816. There is one sailing daily from May to end-Sep (not on Fri from May-mid Jul). Tel. 310103 (24 hours).

There are plenty of good guesthouses and B&Bs.